We understand that EBS volumes have redundancy built-in, which means that they will not fail if an individual drive fails. But their redundancy is limited to Availability Zone scope. EBS does not replicate data automatically across multiple availability zones like other AWS services (S3, DynamoDB, RDS etc).

The durability of EBS is illustrated as follows by AWS in their site
“The durability of your EBS volume depends both on the size of your volume and the percentage of the data that has changed since your last snapshot. As an example, volumes that operate with 20 GB or less of modified data since their most recent Amazon EBS snapshot can expect an annual failure rate (AFR) of between 0.1% – 0.5%, where failure refers to a complete loss of the volume. This compares with commodity hard disks that will typically fail with an AFR of around 4%, making EBS volumes 10 times more reliable than typical commodity disk drives. “

Technically we can overcome this by mirroring EBS Volumes but still it will not solve if there is a failure at AZ level. This constraint strongly suggests that for safe guarding your data you need to take backups and store them in multiple availability zones. Some of the common challenges involved in the backup process include the time it takes to create data copies, the disk space required, the impact on server operations during the copy process.  New generation Storage arrays have the ability to speed up dramatically the backup process by using a technique called as “Snapshot”.

A snapshot is the state of a system (like LUN-level copies of data) at a particular point in time. One of the most common types is Differential snapshots -> which allows for fast creation and reduced disk space consumption. Some common implementations of differential snapshots include copy-on-write or allocate-on-write; Better implementations of these techniques create copies instantly, allow the copies to be used read-write, permit many copies to co-exist and be active at the same time etc

Amazon EBS snapshots are incremental backups, meaning that every snapshot only copies the blocks in the volume that were changed since the last snapshot.  The TOC and only changed blocks are copied (in compressed form) to the S3 in subsequent snapshots. If you have a volume with 10 GB of data, but only 2 GB of data have changed since your last snapshot, only the 2 GB of modified data is written to Amazon S3 during the snapshot process.

AWS does not disclose the internal of their snapshot technology but based on our understanding with storage systems let us explore how it works: 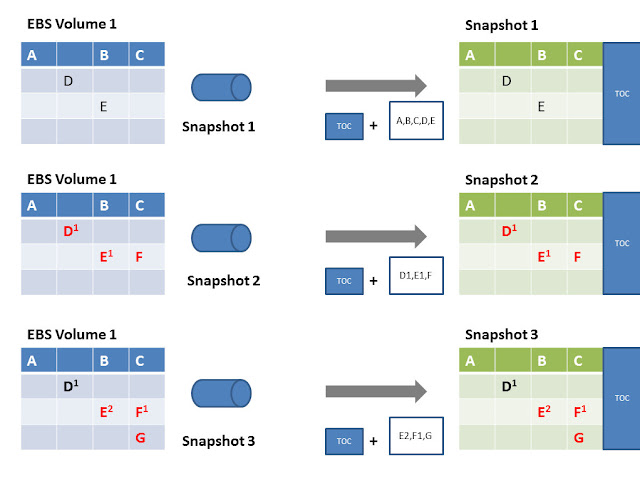 Step 1) when you take snapshot of an EBS volume for the first time, it is a full snapshot, but it only copies the blocks in the EBS volume that contains data.  During the first snapshot, the full TOC and all blocks containing data (A, B, C, D, and E) is moved asynchronously to S3.
Step 2) Imagine in meantime, blocks D and E were changed and F is newly added from the snapshot 1. When you take snapshot 2, this time the TOC and only the changed blocks D1, E1 and F are moved to S3.
Step 3) when you take snapshot 3, blocks E and F are changed and G is newly added as per diagram. This time the TOC and only the changed blocks E2, F1 and G are moved to S3. 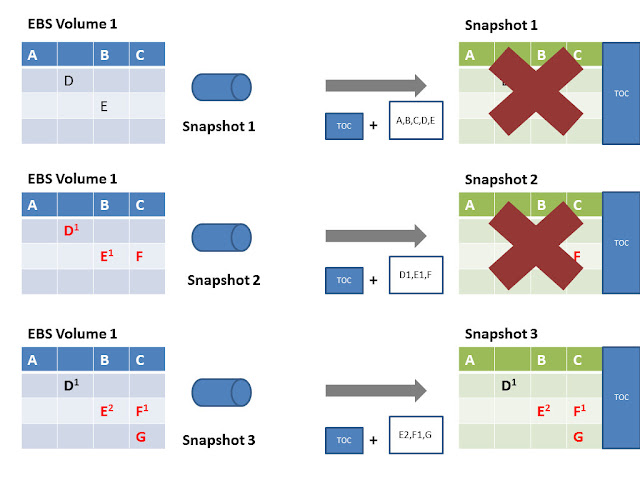 Step 4) since snapshot 3 is the recent and contains the latest data, you can go ahead and delete older snapshots like 1 and 2.  The capacity occupied by blocks like D, E, F, E1 are no more relevant, and they are released and not charged by AWS.

You can observe that the above mechanism is much more cost effective because you pay only for what had changed. Second, the overall capacity of the backup is efficiently used and third snapshots are fast to take than traditional backups. You should note that taking a snapshot can impact the rate of IOPS you get from your volume while your snapshot is pending; this is usually few milliseconds->seconds depending upon the changes occurred between snapshots.

In Amazon infrastructure, Snapshots are usually used for achieving some of the following objectives:


Since EBS snapshots can be taken regardless of whether or not the volume is attached to a running Amazon EC2 instance, it is strongly recommended to either detach the volume or freeze all writes before taking snapshot to prevent data loss. Not all the times we can detach a volume for taking snapshots, imagine you are running a database or Solr Search in EC2, these services need to run continuously and this option is not feasible and might prove very costly.  In Amazon cloud it is a recommended practice to use file systems like XFS which provides option to freeze writes for a while and take the snapshot consistently. XFS can is very useful when we use EBS Striping (RAID 0) as well.

A snapshot of an EBS volume writes a copy of the volume data in Amazon S3 (Not Buckets). S3 is an excellent option for snapshot storage because