People always look for convenience! In the early 20th century, retail industry was still in its infancy taking baby steps across Europe and North America. But the latter half of the 20th century saw the emergence of the hypermarket and the supermarket as they truly simplified the all-in-one-stopshopping experience.
Retail industry today is big business and will continue to remain so for the foreseeable future. Recent estimates put world-wide retails sales at USD 7.5 trillion. Wal-Mart has been the leader at the global stage since its inception. The world’s top 5 retailers are Wal-Mart (USA), Carrefour (France), Royal Ahold (The Netherlands), Home Depot (USA) & Kroger (USA).
In India, retail industry is growing at a rapid pace. Major Indian retailers in this league include Future Group, Reliance Industries, Tata Group and Aditya Birla Group.
One of the retail groups, let’s call it BigX in this article, wanted their last 5 years semi- structured dataset to be analyzed for trends and patterns. Let us see how they can solve their problem using Hadoop.
Original Article written by the author can be found at cloudstory.in
http://cloudstory.in/2012/04/hive-for-retail-analysis/
About BigX
BigX is a chain of hypermarket in India. Currently there are 220+ stores across 85 cities and towns in India and employs 35,000+ people. Its annual revenue for the year 2011 was USD 1 Billion. It offers a wide range of products including fashion and apparels, food products, books, furniture, electronics, health care, general merchandise and entertainment sections.
One-third of their stores have daily sales of USD 25K+. The remaining two-thirds have daily sales of USD 14K+ and USD 10K+. On an average, 1200+ customers walk in and purchase products from each of these stores daily.
Problem Scenario
Solution
This is where Hadoop shines in all its glory as a solution! Let us see how Hadoop was used to solve this problem.
Since the size of the logs dataset is 12TB, at such a large scale, the problem is 2-fold:
Problem 1: Moving the logs dataset to HDFS periodically
Problem 2: Performing the analysis on this HDFS dataset
We had options like Sqoop, Flume , Chukwa etc when we need to move the dataset into HDFS. Since logs are unstructured in this case, Sqoop was of little or no use. So Flume was used to move the log data periodically into HDFS. Once the dataset is inside HDFS, Hive was used to perform various analyses.
Let us see the overall approach in detail below
Problem 1: How Flume solved the data transfer problem?
Flume is a distributed, reliable, and available service for efficiently collecting, aggregating, and moving large amounts of log data. It has a simple and flexible architecture based on streaming data flows. The primary use case for Flume is as a logging system that gathers a set of log files on every machine in a cluster and aggregates them to a centralized persistent HDFS store.
Sample Architecture of Flume Implementation is illustrated below: 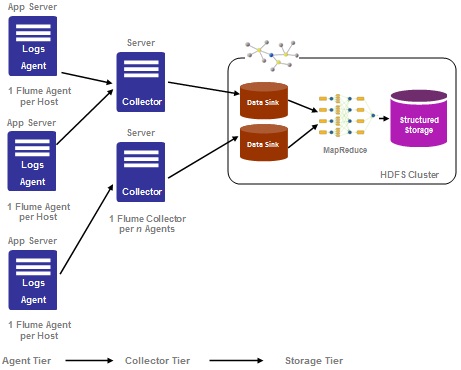 Flume’s typical dataflow is as follows: A Flume Agent is installed on each node of the cluster that produces log messages. These streams of log messages from every node are then sent to the Flume Collector. The collectors then aggregate the streams into larger streams which can then be efficiently written to a storage tier such as HDFS.
Logs from all the nodes can be sent into HDFS on a real-time / daily / weekly / monthly basis. We chose to send certain logs bi-weekly mainly because of the analytical aspect of the requirement and hence daily basis was not warranted in this regard.
Problem 2: Analysis using Hive
Hive is a data warehouse infrastructure built on top of Hadoop for providing data summarization, query and analysis. It provides an SQL-like language called HiveQL and converts the query into MapReduce tasks.
Sample Architecture of Hive Implementation is illustrated below:

Hive uses “Schema on Read” unlike a traditional database which uses “Schema on Write”. Schema on Write implies that a table’s schema is enforced at data load time. If the data being loaded doesn’t conform to the schema, then it is rejected. This mechanism might slow the loading process of the dataset usually, Whereas Schema on Read doesn’t verify the data when it’s loaded, but rather when a query is issued. For this precise reason, once the dataset is in HDFS moving it into Hive controlled namespace is usually instantaneous. Hive can also perform analysis on dataset in HDFS or local storage. But the preferred approach is to move the entire dataset into Hive controlled namespace(default location – hdfs://user/hive/warehouse) to enable additional query optimizations.
While reading log files, the simplest recommended approach during Hive table creation is to use a RegexSerDe. It uses regular expression (regex) to serialize/deserialize. It deserializes the data using regex and extracts groups as columns. It can also serialize the row object using a format string.
Caveats:
Overall Solution Architecture using Flume + Hive
Below figure shows the overall solution architecture implemented for this problem 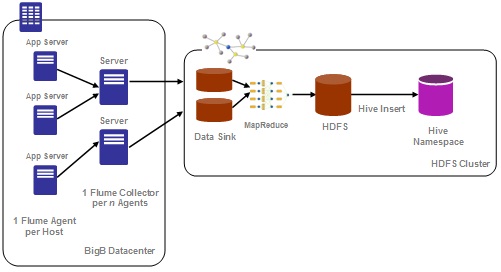 The merchandize details, user information, time of transaction, area / city / state information, coupon codes (if any) , customer data and other related details were collected and aggregated from various backend servers. Flume was installed on these backend servers to transfer the various log files into HDFS. Flume was configured to transfer data on a bi-weekly basis in this case.
As mentioned earlier, the dataset to be analyzed was 12TB. Using the Hadoop default replication factor of 3, it would require 12TB * 3 = 36TB of storage capacity. After a couple of iterations on a smaller sample dataset and subsequent performance tuning, it was decided to go with the following cluster configuration and capacities –
Flume configuration:  Following Flume parameters were configured (sample)
Hive configuration:  Following Hive parameters were configured (sample)
By default, Hive metadata is usually stored in an embeddedDerbydatabase which allows only one user to issue queries. This is not ideal for production purposes. Hence, Hive was configured to use MySQL in this case.
Using the Hadoop system, log transfer time was reduced to ~3 hours bi-weekly and querying time also was significantly improved.
Since this case demands complex querying, Snowflake schema approach was adopted while designing the Hive tables. In a Snowflake schema, dimension tables are normalized usually up to 3NF and facttables are not affected.
Some of the schema tables that were present in the final design were – facts, products, customers, categories, locations and payments. Some sample Hive queries that were executed as part of the analysis are as follows –
Select count (*) from facts;
Select gender, count (DISTINCT customer_id) from customers group by gender;
Only equality joins, inner & outer joins, semi joins and map joins are supported in Hive. Hive does not support join conditions that are not equality conditions as it is very difficult to express such conditions as a MapReduce job. Also, more than two tables can be joined in Hive.
Select products .product_name, products .product_id, categories.category_name from products JOIN categories ON (products.product_category_id = categories.category_id);
Select locations.location_name, count (DISTINCT facts.payment_id) from facts JOIN locations ON (facts.location_id = locations.location_id) group by locations .location_name;
Interesting trends / analysis using Hive
Some of the interesting trends that were observed from this dataset using Hive were:
About the authors:
Harish Ganesan is the Chief Technology Officer (CTO) and Co-Founder of 8KMiles and is responsible for the overall technology direction of its products and services. Harish Ganesan holds a management degree from Indian Institute of Management, Bangalore and Master of Computer Applications from Bharathidasan University , India.
Vijay is the Big Data Lead at 8KMiles and has 5+ years of experience in architecting Large Scale Distributed Web Systems and engineering Information Systems – Retrieval, Extraction & Management. He holds M. Tech in Information Retrieval from IIIT-B
Posted by Harish Ganesan

Excellent post. Any performance numbers on the queries you executed, were they real-time queries or run a job and get result in a few minutes or hours?