We all know that Amazon Auto Scaling launches and terminates EC2 instances automatically in response the traffic. Amazon Auto Scaling supports 5 types of termination policies currently to scale down the EC2 instances in event of low traffic. In this tip we are going to explore how choosing the termination policy wisely can save cost.
Imagine you are running online website with spikey traffic pattern in a day as illustrated below. 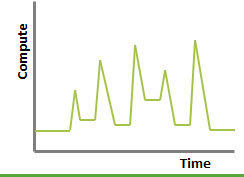 If Instances are rapidly launched and terminated it may lead to cost leakage sometimes. Recommended approach is to scale out aggressively and scale down slowly, Example: If new instances are launched by auto scaling in an hour, we are already paying for that hour, so it is ideal that we retain those EC2 instances during that hour as much as possible and terminate them nearing the hour.
Let us see what options we have in Amazon Auto scaling for termination policies. Instead of discussing all the termination policies, we will take 2 policies and see their fitment:

Oldest Instance: You can configure this option if you want the oldest EC2 instance in your Auto Scaling group to be terminated. Auto Scaling uses the instance launch time to identify the EC2 instance that was launched first and terminates them. One catch to this approach is that Oldest EC2 instance need not be closest to that instance hour, so there are chances that they are terminated within 5 minutes of an instance hour start. Example: Imagine 4 X m1.xlarge EC2 instances are started at 9:00 AM EST and X new instances are launched subsequently during the day in batches according to load pattern. At 1:05 PM EST the traffic is slowed down drastically and Auto Scaling uses the OldestInstance Termination policy to bring down the 4 EC2 instances launched at 9:00 AM EST. Looks fine till now. But there is sudden surge of traffic @ 1:40 PM EST which demands 4 new EC2 instances to be launched. Now Auto Scaling launches the needed EC2 instances in the same instance hour (between 1:00 PM to 2:00 PM EST), we have unnecessarily terminated 4 EC2 instances , paid for it and as well launched another 4 and paid for it again as well. This boils down to cost leakage of 4 X 0.480 (current cost of m1.xlarge instance) = 1.92 USD for single Valley->Spike scenario. Imagine this pattern occurs 3- 4 times a day and totaling to ~120 times a month , which contributes to a cost leakage of 1.92 X 120 = 230 USD per month.
This cost leakage can be more than what we have predicted if: