Part 1: Cost of Latency Series: Why do we need Latency Based Routing ?

Why do we need Latency Based Routing (LBR) ?

Imagine a XYZ Low Cost Airlines from Singapore which operates 100+ destinations around the globe (rapidly expanding its operations every year) with following characteristics :


Since their business has heavy dependence upon the online mediums (web and mobile), their site needs to be highly available, scalable with better performance. Like most of the online companies, the XYZ airlines started their operations with the - Centralized Architecture 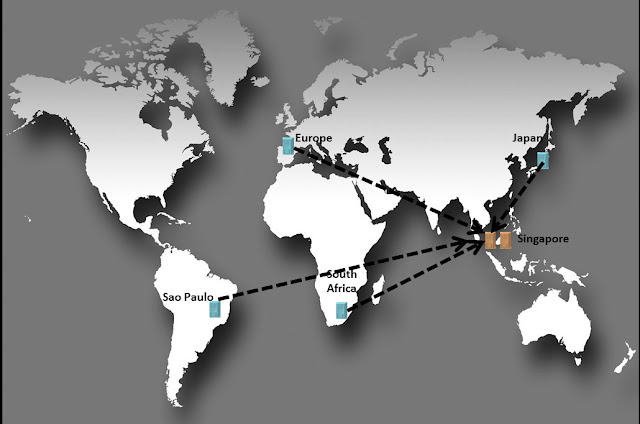 The entire web/app infrastructure is provisioned inside a single AWS region (example Singapore region). User requests originating all around the world are directed to the centralized infrastructure launched at single region. This architecture may be optimum to start with, but when your user base is distributed across multiple geographies things start crumbling. The users accessing the site from different geographies will have different response times because of the network latency in the internet, Also there is single point of failure if the network link to that particular Amazon EC2 region is broken (though the latter is a very rare occurrence).Example: Users from Singapore and Malaysia will have faster response times with AWS Singapore Servers than Users from Europe, MEA regions (they might feel the latency creeping up).
Since the XYZ airline follows a simple centralized architecture and has a data center in Singapore and all the visitors are distributed across the globe, let us see what it takes as the roundtrip latency measurements to access their website in centralized infrastructure:

Note: The above measurements are not constant and may keep varying every few seconds.
If a single round trip takes 121ms from Europe imagine content heavy pages loading multiple images, JS, scripts, HTTP/S, hundreds of AJAX calls etc. It is sure they will land in problems when they expand.