ElastiCache Redis : How to Backup & Launch from RDB Snapshots ? 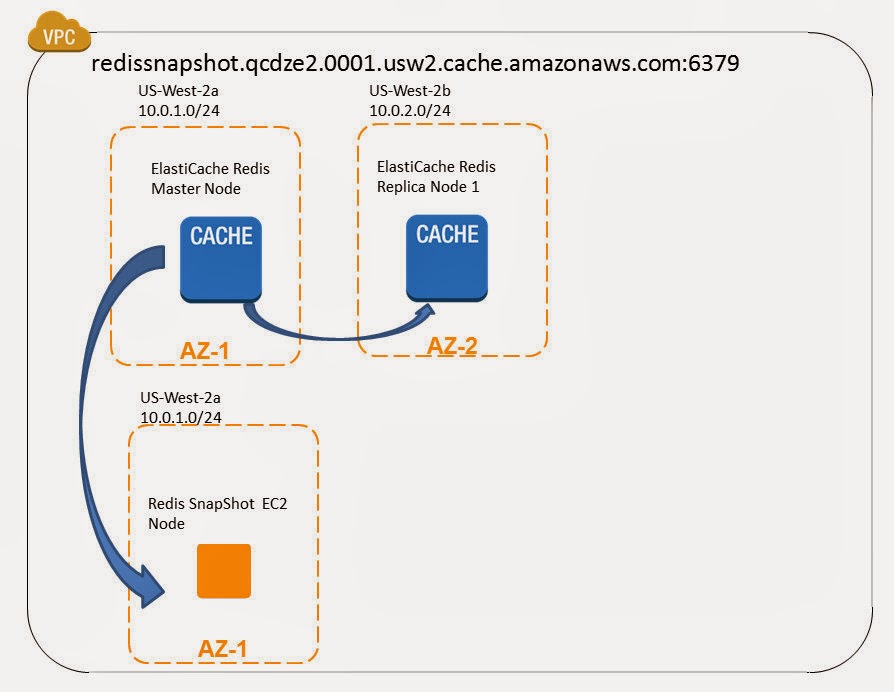 Step 3)Start the Redis Server on the newly launched EC2 instance. It will be listening on the port 6379


where "redissnapshot.qcdze2.0001.usw2.cache.amazonaws.com 6379" is the endpoint of the ElastiCache Master Redis node.
Bringing a Additional Redis EC2 node for snapshots into the infrastructure is not ideal. It adds extra cost and manual labor effort to setup, automate and manage this Redis Snapshot EC2. I hope AWS ElastiCache team will release a mechanism where we can easily take the snapshots from the ElastiCache Cluster itself.

Note: Before this step ensure that security group permissions are opened between the Redis Snapshot EC2 and ElastiCache Redis Cluster.


Step 6)Once the synchronization is done between Redis Snapshot node and ElastiCache Redis Master, you can take snapshot using the command BGSAVE or SAVE in the snapshot EC2 Node. The snapshot file named "dump.rdb" is created in the disk.

Step 7) You can optionally detach it from the ElastiCache cluster by using the command on redis-cli  “SLAVEOF NO ONE”. This step is recommended if your redis cluster size is few GB's and you are backing up persistent data once/4 times a day, as you can save costs by not unnecessarily running your Redis snapshot EC2 instance for 24 hours and automatically bring it up whenever needed.

We conducted a small test to check whether all the above steps are successfully reflected.

We pumped the ElastiCache Redis cluster with 1.8GB of Data spanning few hundred millions of KV data with each record in few <KB size. We observed the time taken to sync the data is about ~5 minutes on m1.large capacity in same AZ deployment.

The replication action with timing is detailed below:

Test whether the same key values are synced between Master Redis Node in ElastiCache Cluster and Redis Snapshot EC2. The below steps illustrate the same:


Important Observation:
Always sync the Redis Snapshot EC2 node with the ElastiCache Redis master node and not with the read slave in the redis replication group. Following error will be displayed when trying to sync with the slave.

We tried the above approach to check whether we can reduce the workload on Redis Master node and take the backups from Slave redis Nodes. As AWS as rightly named it is " Redis Read Replica Nodes" and you cannot use it for snapshot replication.

Step 2) Launch a new ElastiCache Redis cluster from the "dump.rdb" snapshot taken in the earlier stage 1 - step 6 from Redis Snapshot node. Lets understand what is RDB in detail. 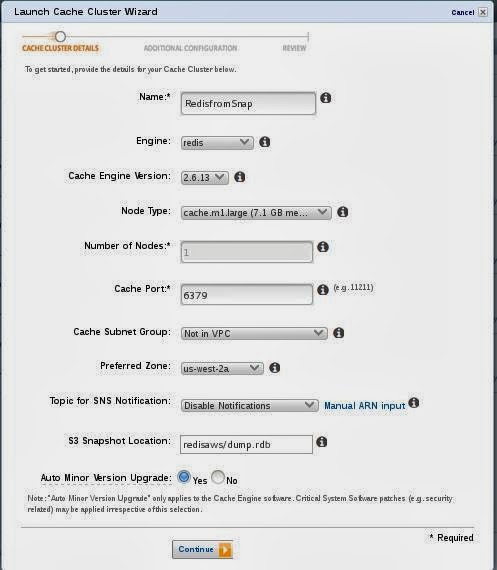 Step 3) Once the ElastiCache cluster is launched. Connect to the cluster endpoint and check for the existence of the same key values tested in the dump.


You can notice from the above that the key values are same and the new ElastiCache node was created properly with original data.


This post was co authored with Senthil 8K Miles

So in order to backup Elasticache I need to run and monitor my own Redis instance? Does that not defeat the purpose of having Elasticache in a first place?