We are going to construct an Apache SolrCloud (4.1) with 12 node EC2 instance(s) inside Amazon VPC in this post.  Since the search data stored inside the SolrCloud is critical, we are going to build High availability at Solr Node level as well as AZ level. This setup will be done inside private subnet of Amazon VPC and will leverage 3 Availability Zones of the Amazon EC2 Region.

Deployment architecture of the setup is given below: 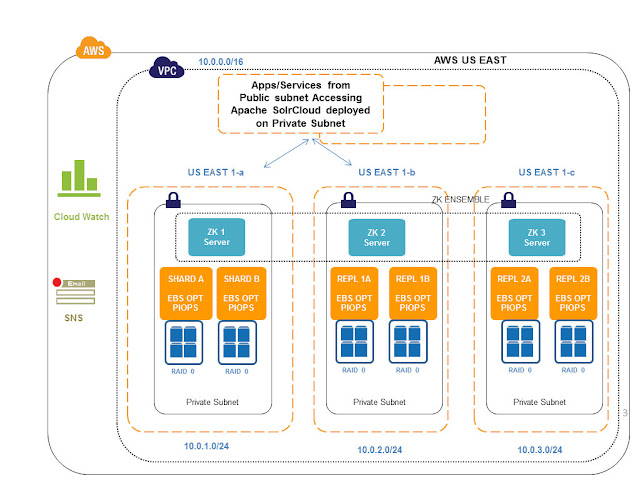 A small brief about setup:


Step 1: Creating Virtual Private Cloud on AWS
Create a VPC with Public and Private Subnets. Assume the Load balancer and Web/App Servers can reside on the public subnet and Apache Solr Cloud will reside on the private subnet of the VPC.

Step 2: Assigning the IP for the Subnets
Create the subnet with its IP range. Chose the Availability zone for this subnet. 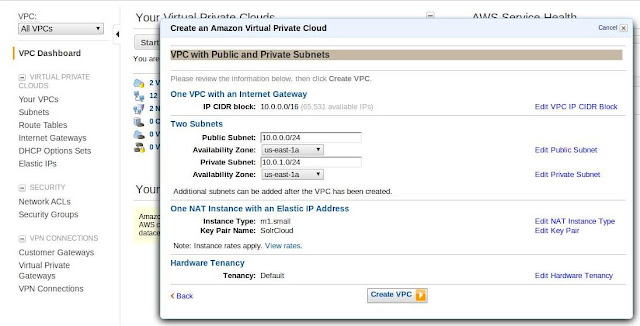 Step 4: Install Java for Zookeeper & Solr
Amazon Linux is chosen as the EC2 OS variant. Execute the following instructions on the respective EC2 nodes after their launch.  EC2 instances should be launched in Multi-AZ in Multiple VPC Private Subnets.
Solr uses Zookeeper as the cluster configuration and coordinator. Zookeeper is a distributed file system containing information about all the Solr Nodes. Solrconfig.xml, Schema.xml etc are stored in the repository.We have used Oracle-Sun Java over OpenJDK

Step 5: Configure the ZooKeeper (v3.4.5) Ensemble:
Since single Zookeeper is not ideal for a large Solr cluster (because of SPOF), it is recommended to configure multiple Zookeepers in concert as an ensemble .In this step we will install and configure 3 ZooKeeper EC2 nodes spanning across 3 different Availability Zones in respective Private Subnets inside a VPC.Zookeeper will be configured on Amazon Linux.

Step 6: Configuring Solr 4.1 EC2 node
In this step we will install and configure 3 Apache Solr4.1 Shard EC2 instances in a single Amazon AZ and 2 Solr Replicas in another AZ in their respective Private subnets. Please note that we have to specify all the ZooKeeper (ZK) hosts on every Solr instance as below.
Note: Solr gets comes with jetty in default, it is suggested to use tomcat for production nodes.
Perform the following after launching EC2 instances in Multi-AZ in Multiple VPC Private Subnets.

Configure the following TCP ports on the AWS security group to allow access between Solr and ZK nodes deployed in Multiple AZ.
This article was co-authored with ramprasad. His linkedin handle in.linkedin.com/in/ramprasadguru

Great walk through. I notices you have a small type in the line when you are starting solr on server 2 and 3. Remove extra Dzkhost entry

Great walk through. I notices you have a small type in the line when you are starting solr on server 2 and 3. Remove extra Dzkhost entry

Nice article. But I think the solr integration with Tomcat is missing here.

Thanks for writing a good blog for solr cloud.

It should be a same result ?